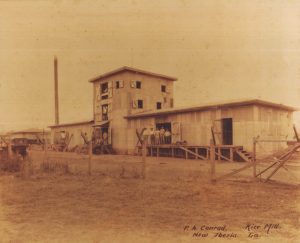 The Conrad Rice Mill is the oldest rice mill in America. It is also one of the leading tourist attractions in this area of the Bayou Teche. In 1981, the Mill was placed on the National Register of Historic Places.

P.A. Conrad founded the Conrad Rice Mill and Planting Company in 1912. He would cut the rice by hand and let it sun-dry on the levees before putting the rice in the threshers. The rice was poured into 100-pound bags and taken to the mill. At that time, the mill operated only three to four months out of the year. Conrad would sell his rice from inventory, waiting for the next crop to harvest.

Conrad was an astute businessman, steadily growing his business to the point where he no longer grew enough rice to meet demands. Buying grain from the other growers in the area supplemented his own crop. To satisfy his customers requests, he also began to sell the rice in smaller sized bags. In the 1950’s, “KONRIKO” was trademarked as an acronym for “CONRAD RICE COMPANY.”

A few years afterwards, P.A. Conrad retired and left the business to his three sons: Phillip, Julian, and Allen. Phillip, the oldest, died at a very early age leaving the two remaining brothers to carry on the family business. After many years of operating the mill, the brothers were at a retirement age and eventually only three New Iberia grocery stores remained as customers.

In 1975 Mike Davis, a former teacher and farmer, bought the mill from the Conrad brothers. Within 10 days of the purchase, the mill was back up and running after laying dormant for two years. Davis quipped, “I would mill for a day or two, then I’d get on the road and peddle the rice.”

The original part of the mill was built in 1912 and received additions in 1917 and 1930. This is significant because it is a rare surviving example of a factory using a belt-drive power transmission. Davis has made many changes and improvements to the mill since 1975 and shows no signs of stopping any time soon.

“Now we sell to every major wholesaler in the state and to every chain store,” Davis said. “We have also developed a specialty rice business in all 50 states and Canada, and we’re beginning to break into the European markets.”

Our tour prices are:

ORDER PROCESSING DELAYS DUE TO COVID-19 SUPPLY CHAIN ISSUES- Due to the current global pandemic situation, our order processing is currently taking longer than usual. We are working hard to ensure all orders are processed and shipped as soon as possible and will continue to provide email confirmation when your order is shipped. Your business, patience and understanding is very much appreciated. Thank you- Conrad Rice Mill Shipping Dept. Dismiss